Check out Morzine webcams below

The webcams located around the resort allow you to check the weather, the ski conditions, or simply discover Morzine village. If you're planning a trip to Morzine or a day out in the mountains, be sure to check them out!

While we understand that the webcams can sometimes appear blurry depending on weather conditions, we assure you that they are regularly updated. So come back later and refresh to see the spectacular views that we all love. If some of the webcams on the mountain appear to be down then don’t worry. It’s likely that they are just disconnected during the interseason whilst the installation is being maintained.

Even though Morzine offers stunning views virtually everywhere you look, it is indeed a pity that the webcams are not relocated for the summer season. During the latter, the views would be a bit more exciting over the valley or lake instead of empty ski slopes.

Morzine's tourist office hosts this webcam, which shows all of the town’s activity right in the centre.

As you can see it points in the direction of the bottom of the Pleney.

On a normal day, you can see the square, the street leading to the Pleney gondolas, and the bottom of the red run called "Le Stade" from this viewpoint. 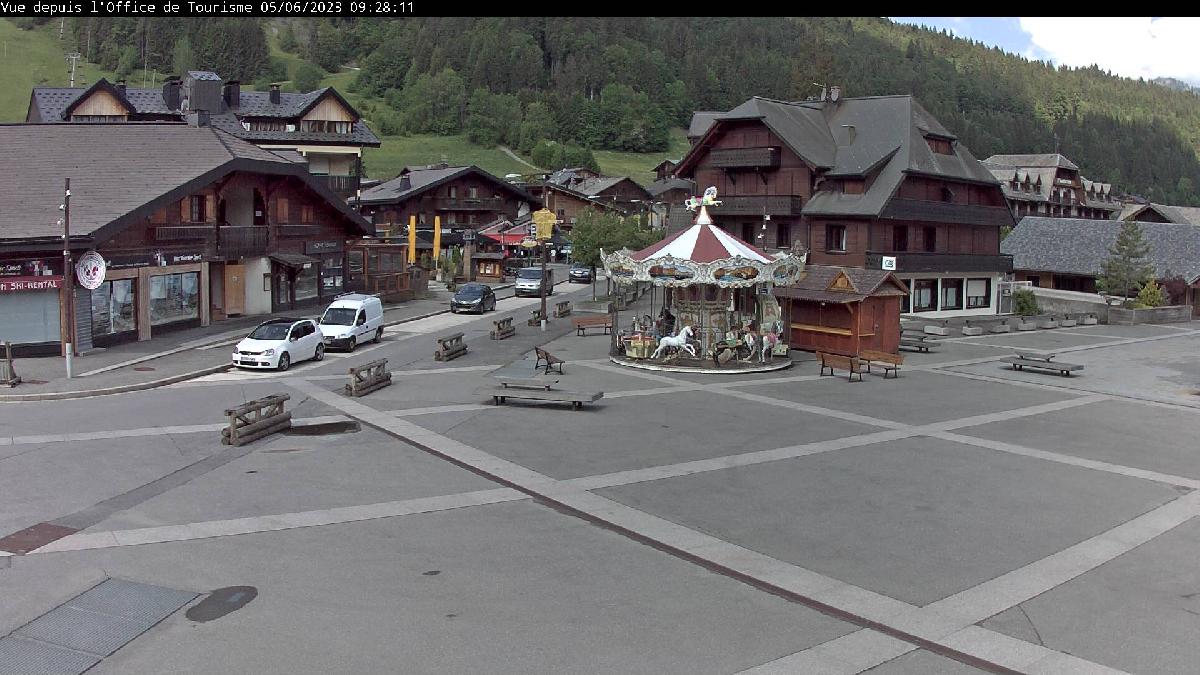 Morzine Webcam at the top of Pleney

On the right side of the webcam, you can see the hotel 'Le Viking'.

A member of the Belambra Club, the hotel offers spectacular panoramic views of the mountains from its sunny terrace as well as access to the slopes right from its doorstep. Lunch is served in the restaurant, and the heated indoor/outdoor pool is available for a dip outdoors.

Spin the webcam around and you’ll notice Mont Chéry just a short distance away. The Mont Chéry ski area is located in Les Gets and is a hidden gem among the Portes du Soleil. The slopes are rated mainly red and a few blacks, but don’t let that put you off venturing over to ski there. The slopes are usually quiet and very wide which makes them an absolute pleasure to ski. It’s also a great place to mountain bike in the summer.

If you move further the webcam to the right you’ll see a stunning view of the famous Roc d’enfer. Roc d'enfer offers an array of mountain and adventure activities to thrill-seekers and wilderness lovers alike in both summer and winter. There you can embark on the most spectacular forest trails in a natural setting and marvel at the magnificent views of the Graydon Alps, the Dents du Midi in Switzerland, and Lake Geneva.

After passing the Pleney mountain on your left you will see Nyon and Chamossière. Both of which are part of the Morzine ski domain. In 1934, the Pleney gondola was amongst the first historic gondolas to open. With the development of downhill skiing facilities over the next few years, Morzine was also able to equip the mountainous regions of Pléney, Nyon, and Chamossière.

This 360° webcam is positioned at the top of the Raverette chairlift, which stretches from the plateau to the summit of Nyon. If you enjoy hiking, then this is a great walk. Or you can ride on a chairlift some of the way and enjoy the spectacular views.

The webcam below is positioned on the roof of the Eagle restaurant, on the plateau of Nyon. 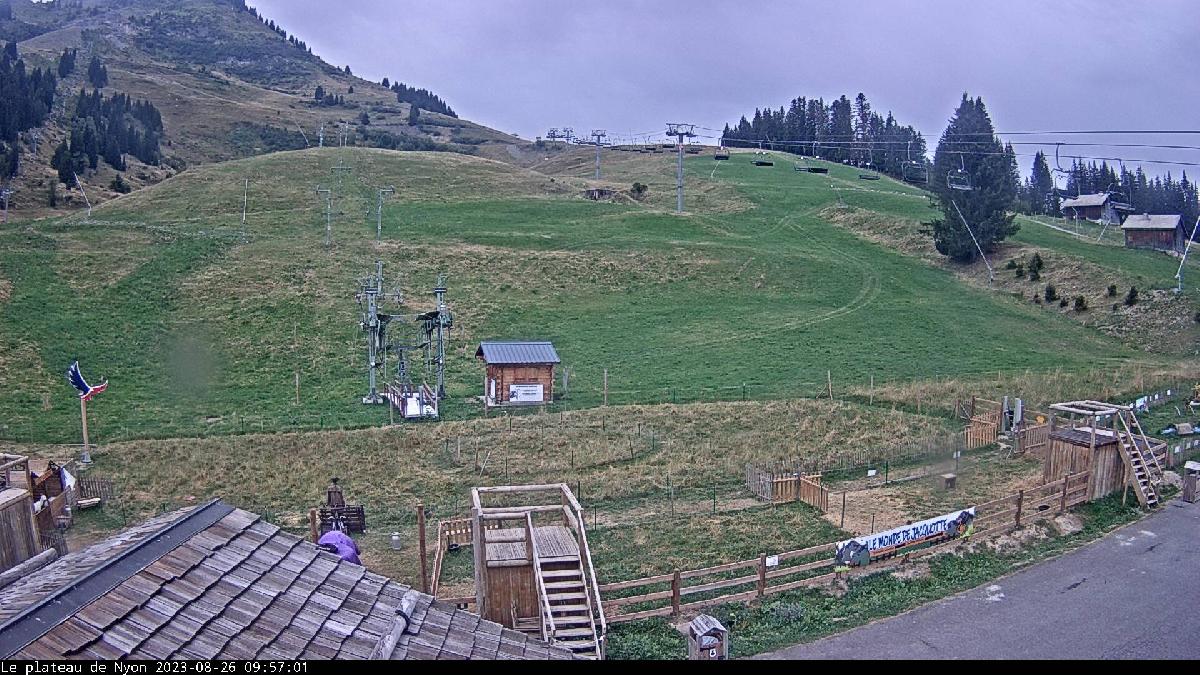 We love the Morzine webcam at the top of the Chamossière chairlift. The view is nothing less than amazing on a clear day with beautiful views visible for miles.

You’ll notice that the views are just as stunning in the summer as they are in the winter. And you can see mountains such as Les Dents Blanches and le Mont Blanc.

You can also clearly see two lakes when the snow has melted. The lake of Joux Plane is a popular cycling mecca, while the lake of Nyon Guérin is used for snow cannons. If you look closely, you may also be able to see Lake Geneva a little further down the valley (Lac Léman in French). It is the largest lake in Switzerland and one of the largest freshwater lakes in Europe.

Below are the Morzine webcams located in Avoriaz. Some of them offer a view of the majestic mountains surrounding the town. There you can hike in the summer or ski in the winter. Other webcams provide a glimpse into the local happenings in the small quirky town.

As Avoriaz is the highest of all the towns in the Portes du Soleil, there is a chance you will see a beautiful sea of clouds on the webcam pointing down towards Morzine. Visitors can ride a horse-drawn sledge around the pedestrian-only village (in winter). It adds an additional layer of nostalgia to the otherwise modern resort.

Occasionally you can see Switzerland from the webcams at the top of Avoriaz. If you have the opportunity to visit any of the Swiss resorts you will find the other villages to be totally distinct from one another. Explore each one and discover its charm.

Arare is one of skiing area of Avoriaz and the one where the snow lasts longer.

Webcam of the Portes du Soleil

At the top of Grand Conche this webcam is facing Les Dentes du Midi et Les Dents Blanches. You can also check the conditions of the famous Swiss Wall, one of the most difficult run in the Portes du Soleil. 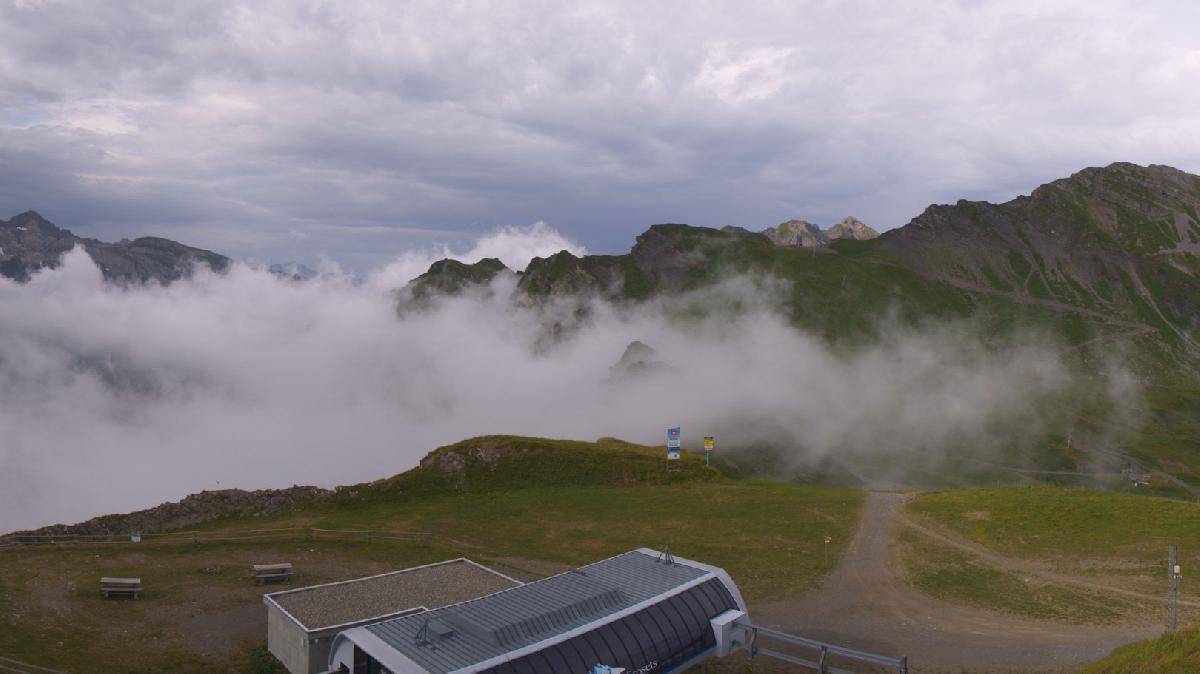