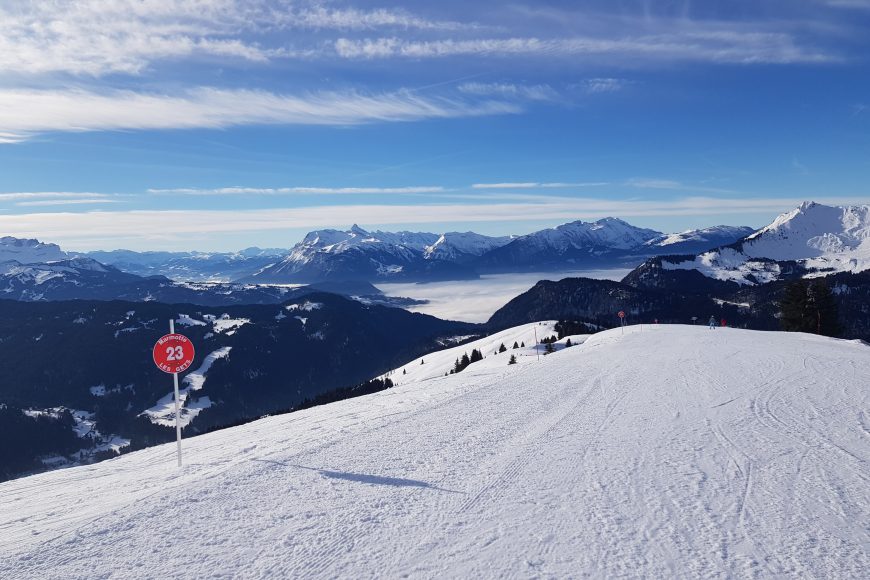 The weather over the past couple of weeks has been fairly extreme, and unfortunately not in a way that is good for the snow conditions! So how is the Portes Du Soleil looking after the storm has passed?

There has not been any snowfall, not even at the highest altitudes, since the twenty second of February. The strong winds and high freezing level combined with precipitation has meant that large amounts of snow have been washed away.

However, it is a testament to just how much snow fell in December – there has been five and a half metres so far already this winter – that the pistes are still in incredible condition. The total snow depth is still two metres on the lower slopes and three and a half metres at the top of the mountain. There is still plenty of snow to go around!

The avalanche risk has dropped from five out of five to two out of five, although because of the rain and lack of any recent snow there isn’t really any point heading off piste at the moment.

Almost the entire ski area is open now – the big news is that the Pointe chairlift on Mt Chery is broken and will not be open again for a couple of weeks, although it is still possible to access the runs on the back of Mt Chery via the two drag lifts at the top of the Mt Chery bubble.

The snow parks in Chapelle, Mt Chery and Super Chatel are all up and running with plenty of features. The two half pipes in Avoriaz are also open, with one for beginners and a larger one for more experienced riders.

The pistes are very hard packed first thing in the morning and can be quite icy, but with the current warm, sunny weather they quickly soften up by mid morning. However, in the shade it can remain icy throughout the day.

The current forecast is for plenty of new snow on Thursday, Friday and Saturday. There could be half a metre or more on the way, and it will be a welcome addition to the current base. It looks as though the weather will begin clearing up from the start of next week, and with the February half term crowds about to arrive it will be a good idea to get out and make the most of the fresh snowfall as soon as it arrives!