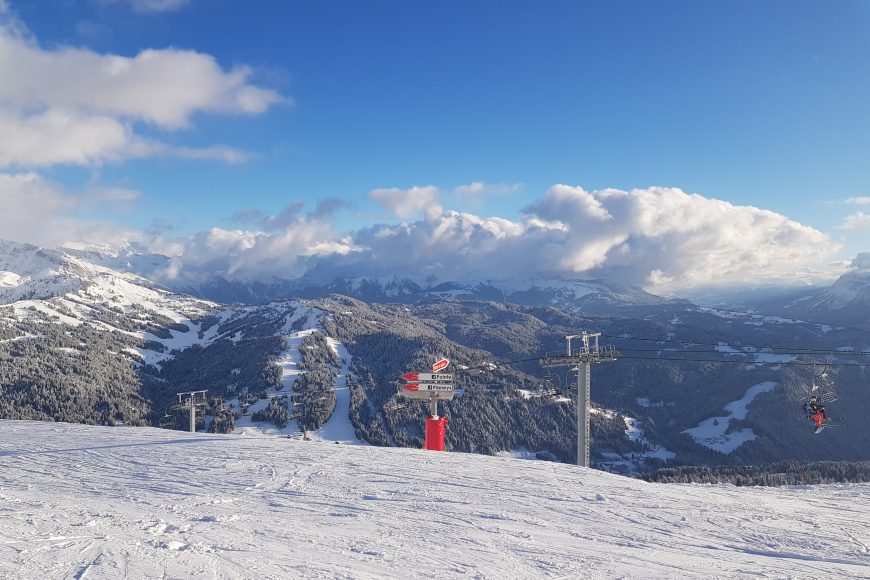 This week marks the first week of the busiest period of the winter season, as countries across Europe begin their half term holidays. This busy period will continue for the next couple of weeks, ending around the fourth of March. The mountain has become noticeably busier this week with large queues at the Super Morzne and Pleney lifts, especially first thing in the morning as everyone gets their children to ski school.

The good news, however, is that the snow conditions have been excellent. Around twenty centimetres of snow fell on Sunday throughout the afternoon and evening, meaning that there was a nice bit of fresh snow on Monday morning. The more easily accessible off piste quickly became tracked out, but there was still fresh snow to be found for anyone venturing slightly further afield.

Tuesday and Wednesday were sunny but quite cold, with temperatures around minus five degrees. The sunny weather really brought the crowds out and the slopes have been very busy for the last couple of days.

Things have changed considerably for the last half of the week, however. It has begun raining in Morzine and, whilst there is expected to be some snowfall in Avoriaz over the next couple of days, the freezing level will mostly be around two and a half thousand metres. The highest peaks in Avoriaz are around two thousand four hundred metres, meaning that at the moment there will probably be rain right to the top of the mountain. It is unfortunate that the temperature has risen, as the current precipitation combined with the recent cold temperatures would have meant plenty of fresh snow.

However, the freezing level is expected to drop around the weekend and there should be some fresh snow coming next week. The current rainfall should not have too adverse an effect on the pistes, as there is still plenty of snow around. It might not be the most enjoyable experience for children in ski school this week, but the good news is that there is still a base of well over two metres and the snow on the pistes. There has not been any significant wind either, which has made skiing conditions much better considering the problems with high winds in January.

The next couple of weeks will be very busy as families take advantage of the school holidays, but the sun should come out next week and the entire Portes Du Soleil area is open, so there will be areas that are not quite as crowded, such as Mt Chery and Torgon.