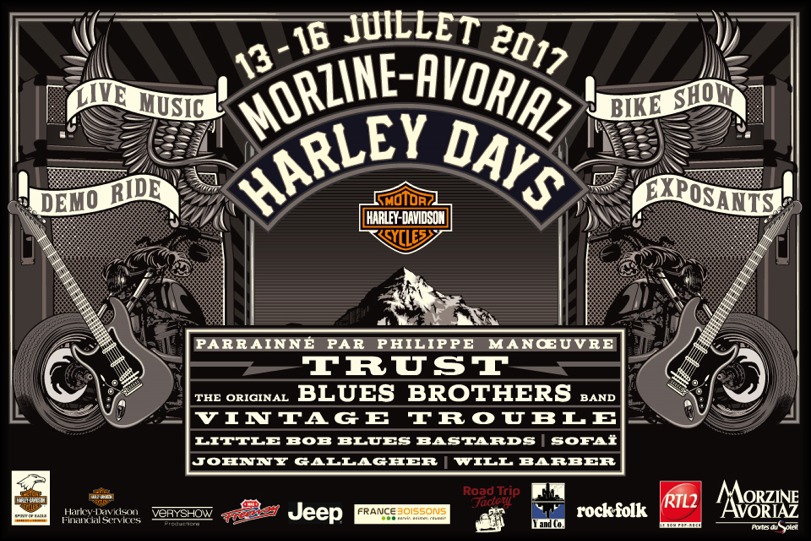 Harley Days is a festival held in Morzine every couple of years, organised by the Harley Owners Group (or HOG) France, a group for the owner of Harley Davidson Motor Bikes which has around thirty different chapters, with members from Normandy in the north to Bayonne in the south. The Harley Days festival is a chance for them to come together and share their passion for all things Harley Davidson, comparing bikes, testing out new bikes and enjoying bike demonstrations and live music. Thousands of owners and fans descend on the town for the event as well as many people from the area who just want to come and enjoy the event.

In 1903 William S Harley and his friend Arthur Davidson built their first motorbike in Milwaukee. The bike was not a great success, and struggled to climb hills. They then began working on a second bike that was finished in 1904. In 1905 they began selling their engines through magazines,and in 1906 they built their first factory. The company continued to expand, and during World War One the company sold twenty thousand bikes to the US Military. By 1920 they were the largest Motorcycle manufacturer in the world. They were one of only two American Motorcycle manufacturers to survive The Depression and continued to win lucrative contracts with the US Government during World War Two. The growth carried on in the post war years as Americas economy boomed. In 1983 the company set up the Harley Owners Group as a way to build up brand loyalty and promote events celebrating the lifestyle of Harley Owners.

The Harley Days festival takes place around Bastille Day – July 14th. The Rue Du Bourg is transformed into a market selling all sorts of Harley Davidson memorabilia as well as various items of clothing and jewellery. Many Harley Davidson bikes are also displayed along the Rue Du Bourg. A number of bike related events also take place including rides and demonstrations. The main evening entertainment takes place in the town square by the Office De Tourisme. A large stage is erected and bands play throughout the evening. Previous bands to perform include Toto and Status Quo. This year’s event runs from July 13th to July 16th and features music from Little Bob, The Original Blues Brothers Band, Vintage Trouble and Trust.