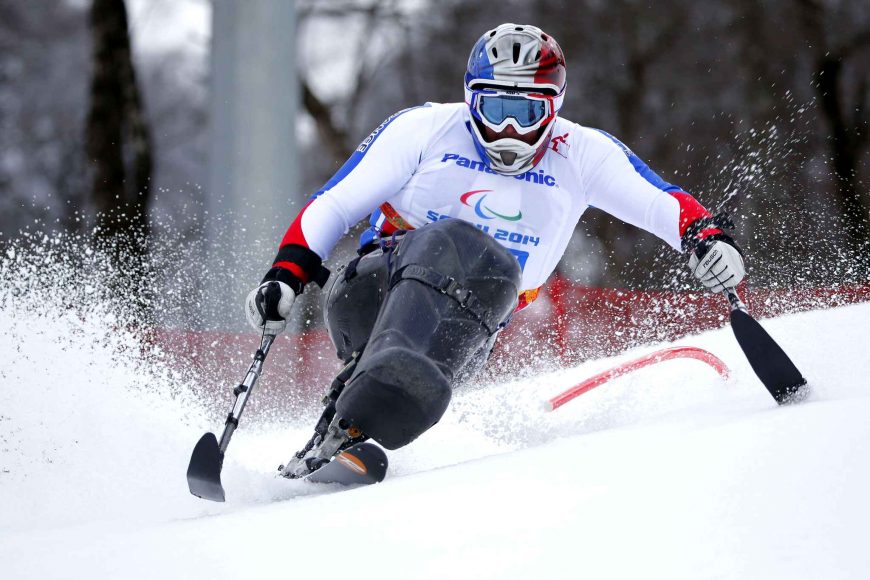 The Pyeongchang WInter Paralympics are coming up in 2018, and one Morzine-Avoriaz local will be hoping to end his career on a high.

Yohann Taberlet was born in Thonon Les Bains on March twenty ninth 1981. He took upskiing at an early age and skied in competitions for the Morzine-Avoriaz team. Various injuries forced him to retire from racing at the age of twenty, at which point he planned to concentrate on his studies and career in commerce. Then, a year later, on September twelfth 2002 a paragliding accident changed his life completely when he was left paraplegic following a thirty metre fall. After ten months of intense rehabilitation, he began looking to handisport ski racing.

Sitskis were first manufactured in 1967 and the technology has progressed to include fibreglass and polyester to reduce weight. They involve sitting on a single ski with small skis attached to poles. This monoski design was first incorporated in the Winter Paralympics as a demonstration event in 1984 and a full medal event in 1988.

Some career highlights have included French Champion for giant and French champion for super slalom in the 2009-2010 season, a number of podiums at both World Cups and World Championships, fourth in Giant Slalom and fifth at the Slalom at the 2014 Winter Paralympics and sixth at the Downhill at the 2010 Paralympics. As well as racing for the French team he also races for the Customs Officers, for whom he also works. He trains for four hours a day.

There are always highs and lows in racing, and handisport ski racing is no different. Taberlet has suffered a number of mishaps including injuries to his right side while training for the 2003-2004 French Championships and a rib injury at a World Cup event on January thirtieth 2015 in La Molina, Spain.

Yohann Taberlet’s ambition is to win a gold medal at this season’s Paralympics in South Korea. He is currently planning to retire at the end of the 2017-2018 season so it would be an amazing end to a stellar career to finish on such a high.