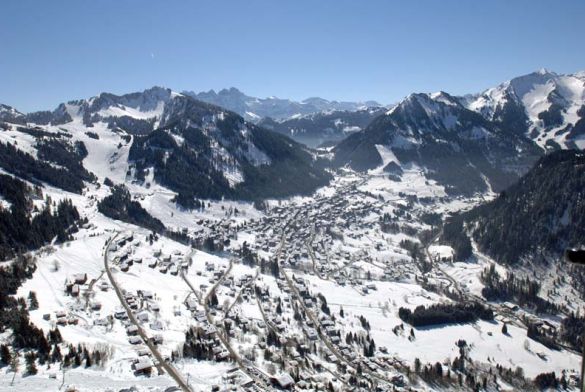 Chatel, one of the villages of the Portes Du Soleil, has just celebrated its seventieth birthday. In the winter of 1947 the Vonnes Teleski, the first step that would eventually see it join up with the Portes Du Soleil several decades later. During the continued developments over the following twenty years the Super Chatel area opened up further, including the construction of the first gondola in 1967 as well as the first link between Chatel and Switzerland. From 1968 to 1984 the Linga area opened up, linking Chatel with Avoriaz and Morzine. Before the advent of the ski industry in Europe and the construction of ski lifts, Chatel had already begun to enjoy some new found prosperity with tourists coming to enjoy the thermal spas. The tourist industry was disrupted during the two World Wars, but in the years between them development continued, preparing the village to welcome the ski industry during the post war boom.

The most recent improvement in the area was the construction of the Gabelou and Portes Du Soleil chairlifts that linked the Linga and Super Chatel areas together, meaning that it was no longer necessary to get a bus between the two ski areas.

Celebrations took place on the second of December, which coincided with a partial opening of the Pre La Joux ski area.

The celebrations included an exhibition at the old customs house celebrating the old town and its history, videos highlighting seventy years of skiing in Chatel, the ESF and the changing seasons of winter and summer. There was also a bell ringing display that allowed people to download an app for their phones to hear the difference in sound between the different bells, matching the modern with the traditional.

Amongst speakers at the event were MP Marion Lenne, Mayor Nicolas Rubin, who praised former mayor Andre Crepy in the development and continued success of the area and Sub Prefect Evelyne Guyon who spoke of the growth in the past seventy years that has seen the town grow into a premiere destination for summer and winter activities.

The town is continuing to grow, with a water park planned as well as an improvement in the links between the different areas.